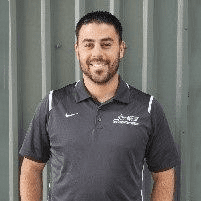 Corey, one of the few Colorado Natives left, has been an Athletic Trainer for 10 years. He earned his undergraduate degree in Athletic Training from Metropolitan State University of Denver and then went straight to Graduate School at Auburn University. While at Auburn he studied Kinesiology and Exercise Science as well as worked at Fort Benning Army Base as an Athletic Trainer working with Basic Training Soldiers. Corey has been the Athletic Trainer at Arvada West High School for 9 years and has been teaching at MSU Denver for 4 years now. Corey loves to help people and believes that good medicine is not just looking at just one part of the body but must encompass the whole body, the mind, and including the patient’s life in the treatment plan. When Corey is not working or spending time with his wife and daughter, he loves to play soccer, volleyball, and run.