Nicotinamide adenine nucleotide (NAD+) has emerged as a key regulator of cellular processes that control the body’s response to stress. NAD boosters, small molecules that raise NAD+ levels, are now considered to be highly promising for the treatment of multiple diseases and the potential extension of the human lifespan.

Nicotinamide adenine dinucleotide (NAD) is one of the most important and interesting molecules in the body. It is required for over 500 enzymatic reactions and plays key roles in the regulation of almost all major biological processes (Ansari and Raghava, 2010). Above all, it may allow us to lead healthier and longer lives. 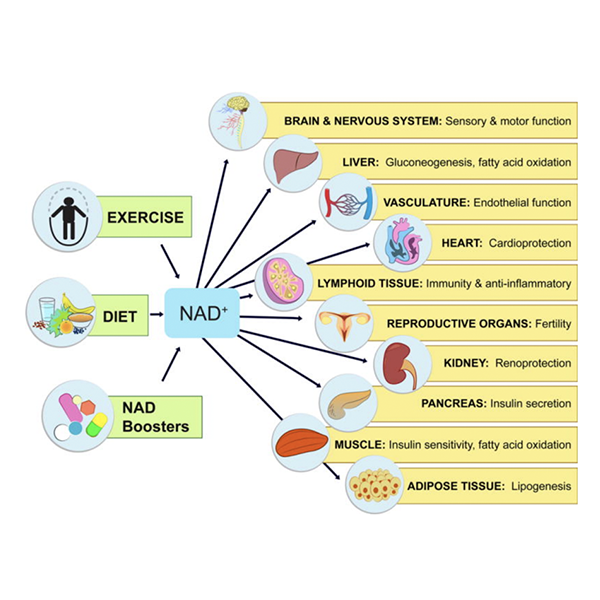 By modulating NAD+ sensing enzymes, it controls hundreds of critical processes from energy metabolism to cell survival, rising and falling depending on food intake, exercise, and the time of day.

NAD+ levels steadily fall as we age, leading to a decline in the function of cells and organs. By raising NAD+, NAD+ boosters can have profound effects on the health and survival of mammals. Increases in NAD+ promote cognitive and sensory function, gluconeogenesis in the liver, lipogenesis in adipose tissue, insulin secretion in the pancreas, and insulin sensitivity in muscle. NAD+ also promotes endothelial cell proliferation and protects against cardio- and cerebrovascular disease. NAD regulates immune function and inflammation and, protects against acute injury in the kidney. NAD promotes and extends fertility in both males and females, ostensibly by activation of sirtuins.

Liver Function: Key enzymes in NAD+ signaling pathways are known to protect the liver from fat accumulation, fibrosis, and insulin resistance, which are related to the development of fatty liver diseases, such as NAFLD and NASH.

Kidney Function: Several lines of evidence indicate that reduced levels of NAD+ in aged kidneys and a corresponding decrease in sirtuin activity are largely responsible for reduced kidney function and resilience with age (Ugur et al., 2015). 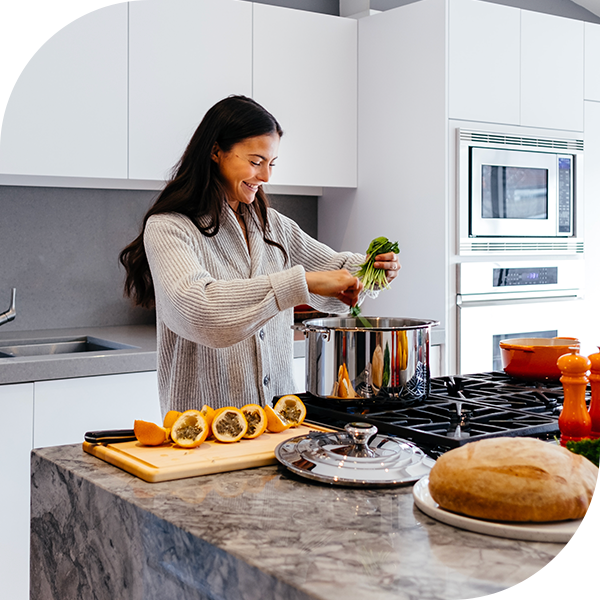 Endothelial and Vascular Function: Cardiovascular and cerebrovascular diseases contribute to the greatest decline in quality of life after 65 and are directly responsible for about one-third of all deaths (Nichols et al., 2014; Ungvari et al., 2010).

DNA Repair and Cancer: Because NAD+ is involved in so many aspects of cancer biology, from mitochondrial activity to cell survival, there are a variety of ways it could be used in the clinic. The rationale for reducing NAD+ levels in tumors is that they will be less able to repair DNA damage, thereby increasing their sensitivity to chemotherapeutic agents.

Immunity and Inflammation: There is a growing body of evidence that NAD+ precursors can have anti-inflammatory effects.

Aging and Longevity: Total NAD+ levels were once considered extremely stable. Recently, however, it has become clear that a steady decline in total NAD+ levels over time is a natural part of life for all species, from yeast to humans (Balan et al., 2008; Belenky et al., 2007; Lin et al., 2004; Massudi et al., 2012; Mouchiroud et al., 2013; Zhang et al., 2016; Zhu et al., 2015). This decline, along with the decreased activity of NAD+ signaling proteins, is believed to be one of the major reasons organisms, including humans, age.

A decline in NAD+ during aging is believed to be a major cause of disease and disability, such as hearing and vision loss, as well as cognitive and motor dysfunction, immune deficiencies, auto-immunity, and dysregulation of the inflammatory response leading to arthritis, metabolic dysfunction, and cardiovascular disease. In mouse models, NAD+ boosters prevent or treat a variety of different diseases, prompting a search for NAD+ boosters that are safe and effective as drugs to treat both rare and common diseases, and potentially aging itself. 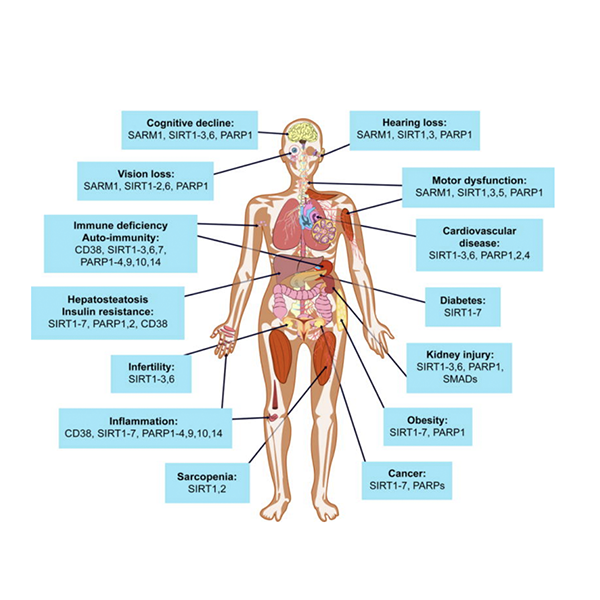 NAD was first described in 1906 by Harden and Young as a cell component that enhanced alcohol fermentation (Harden and Young, 1906). Then in 1936, Warburg showed that NAD is required for redox reactions (Warburg and Christian, 1936) and solidified the nomenclature: “NAD” refers to the chemical backbone irrespective of charge, “NAD+” and “NADH” refer to the oxidized and reduced forms respectively. In 1963, a breakthrough came with the discovery that NAD+ is a co-substrate for the addition of poly-ADP-ribose to proteins (Chambon et al., 1963).